The next few weeks are likely to be really busy with window cleaning. This is good and bad. Good because we are lucky to have work and are physically able to work. And bad because if I have just enough energy after work to either knit or blog post, I'll probably choose to knit a row before sleep. It doesn't mean I don't love you any more. We need to work full tilt when there is work to make up for the times when, for whatever reason, people don't get their windows cleaned. Our winter rainy season, when we get one, can last up to four months or so, and people generally wait it out. At some point the rain and winds and pollen and salt spray reach critical mass, and then suddenly we are inundated with jobs.

We had one of our annual giant-ass window jobs the other day, just as the current heat wave was getting started. Heat wave + window cleaning=not much fun. I did have an interesting supervisor though: 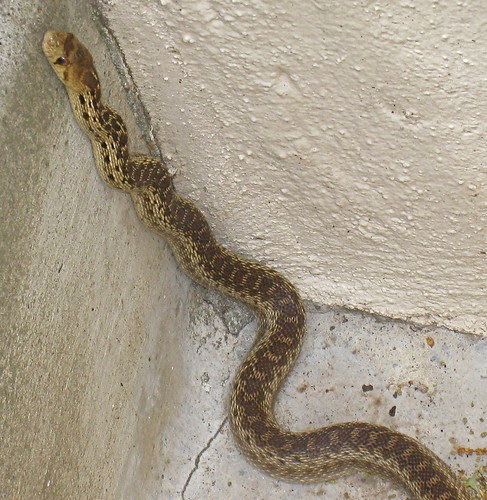 I'm used to all the spiders that we normally deal with in and around windows. We even had a pet spider living in the car, for whom we would bring the occasional fly, so that we could sit and eat our lunch while she ate hers. This little garter snake was just chillin' out, and more nervous about me sticking my camera in his face that I was of him sneaking up on me and running up my pant leg. The owners said they had recently killed a rattlesnake near the house, but after living in the Missouri Ozarks and dealing with copperheads and rattlers and moccasins underfoot, never mind the mosquitos, horseflies, ticks and chiggers, I guess I'm jaded.
There were also some gorgeous flowers, including this rose. 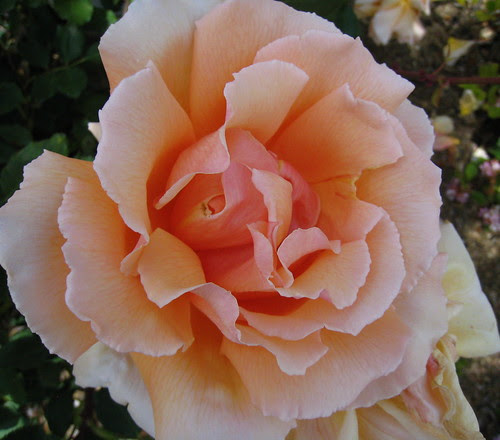 We can't grow roses here, too cool and too much fog, but I'm happy with the trade-off.
On the way back from the job was a pasture with fiber on the hoof. 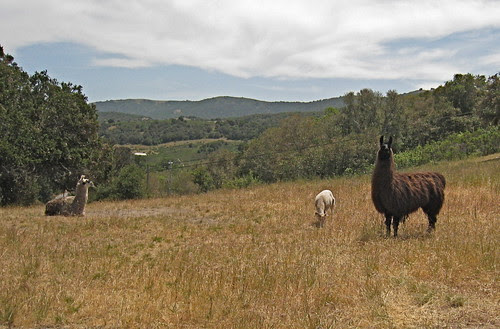 Two llamas, rolling in the dirt, and a shorn sheep. The big brown guy was very friendly and came right over to the fence. He'd be a great addition to our back yard. I wonder what the cats would think? 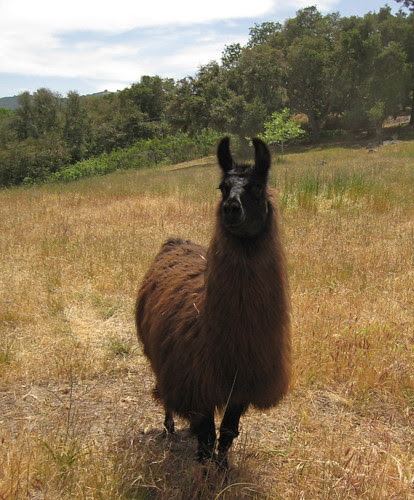 I'm still squeezing in time for knitting. Almost done with the Tesserae Socks in Somoko. I've started the arch shaping on the Francie sock in Pagewood Farms yarn, and discovered an error clear back when I turned the heel. Sigh. Will I ever learn to count? I'm not ripping back. I've also done about 40 rows on the VLT shawl. I forget the name, I can only call it the catbutt shawl. You know which one it is (I think it actually called the half-curved shawl). After 15 tries at the cast on and first row, I finally got the hang of it, although I am putting in lifelines every few rows, and stitch markers with every pattern repeat. No pictures, no one wants to see errors in socks and lace on the needles.
Posted by catmum at 10:45 AM

Well, I have a love/hate relationship with work also... and apparently with yours, but I DO know how it is, feast or famine and I'm glad you're feasting right now, I just hope the heat wave breaks a bit for you.
LOVE the photo of the garter snake, loves me the non-venomous kind, ditto with the spiders... while I was painting our old house a few years ago I made friends with quite a few, moving them around a bit so as not to cover them in paint.
That rose. such a beautiful delicate warm peachy pink, I can just almost smell it!
I completely understand the blogging vs knitting when that tired (she says as she doesn't update her own blog)...
catbutt shawl :^D

You take great care of your wonderful jaded self, 'ya hear'?

oh yeah, I'm thinking the cats would like that big brown llama living in your back yard ;^)
just think of all the circus acts they could come up with for your amusement and entertainment.....

I understand how difficult it is to fit everything we want to do in our limited free time. Spend time on the computer or knit? I usually want to knit, however the challenge is prying my away from the computer. I haven't knitted in days now (too hot anyways), but I hope to do a little soon since I will be reimaging the computer hard drive and thus won't have that to distract me from knitting and other things.

So do you see llamas? Or do you see very large hanks of yarn on 4 legs?

Spiders scare me. I don't think I could concentrate on driving if I knew there was one running loose inside my car.

This is a Flickr badge showing public photos from tangocatmum. Make your own badge here.